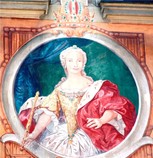 During the Middle Ages, Austria was an assembly of dukedoms belonging to the Holy Roman Empire.  The land that was at that time Austria (from Melk on the Danube to the Vienna Woods) was in 1156 elevated to the rank of an independent duchy with its capital Vienna and Henry II as Duke of Austria.

The Habsburgs ruled the country from the 14th Century and accrued the Duchys of Carinthia, Carniola, and Tyrol. Originally the Habsburg dynasty was founded in Switzerland. Under the reign of Maximilian I, Austria reached its maximum expansion.  Through his marriage to Mary of Burgundy, he gained control of Alsace, Lorraine and the Netherlands and through the marriage of his son Philip to Joanna of Castile and Aragon, he was able to secure the rule of the Habsburgs over Spain and the Spanish territories.  In the years 1529 and 1683 the Turks attempted to conquer Vienna, failing both times. As a result, Hungary and Croatia were folded into the monarchy.  When Charles died in 1740 without a male heir Maria Theresa became Empress.  Then for eight years the empire was forced to fight in the Wars of Austrian Succession against France, Prussia and Spain.  Maria Theresa and her son Joseph II are responsible for bringing the era of enlightenment into Austria.   The rights of the nobility and the church were constricted, serfdom was abolished, and religious freedom was made a right allowing for Protestant religious practice.  In 1848 a strong revolution broke out in many cities, including Vienna, Milan, Venice and Prague.  Resulting in the creation of the first constitution of Austria. In 1867 dual sovereignty was declared between the Austrian Empire and the Kingdom of Hungarian, each having their own constitution.

On 28 June 1914 the Archduke Franz Ferdinand and his wife were shot and killed in Sarajevo, triggering the First World War.  Germany sided with Austria against Serbia, France, England, and Russia. The war ended with the defeat of Austria in 1918 and the first Republic was proclaimed. 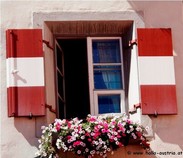 In March 1938 German troops invaded and Austria was incorporated into Germany.  The Second World War ended in 1945 a second Republic was proclaimed.

26. Oct. 1955:the Soviet Union ended its occupation, and a constitutional law of perpetual Austrian neutrality was inacted. This ist Austria's National Day.

Here is the information on one of our favorite condensed history books about Austria: