The city of Innsbruck is located at the confluence of the rivers Inn and Sill.  Its importance as a commercial center dates back to the Middle Ages. Today there are numerous attractions not be missed: The "Golden Roof" is a bay window, which was built in 1500 as a lodge for Emperor Maximilian I and was decorated with 2657 golden bricks. The Ambras Castle, formerly the seat of the Tyrolean sovereigns, it is now used as a museum. The Hofkirche was built as a tomb for the Emperor Maximilian although he was actually buried in Wiener Neustadt, Lower Austria.

Tyrol is characterized by its mountains with only a few areas below 500 meters high. Places like St. Anton, Kitzbühel and Seefeld are famous for their tourist attractions in the winter and in summer. Innsbruck, he capital city of Tyrol, hosted the Winter Olympics of 1964 and 1976. The Tyrolean dialect is very strong and the Alpine culture is particularly neat.

Major tourist sites are Hall, Wattens with the Swarovski Crystal Worlds, Schwaz or Kitzbühel. Since 1945, The village of Alpbach holds an annual conference of leading representatives from politics, science, business and culture. The Achensee is Tyrol's largest lake, it is warm enough for swimming during summer.

Vorarlberg is Austria’s westernmost and smallest province. Though crossing the barrier of the mountains of Vorarlberg is closer to Germany and Switzerland than the distance to the other provinces of Austria. From the Bregenz Ache to the high Alps extend idyllic small villages.  Agriculture and Alp services are major industries here.Especially beautiful are the old farmhouses. 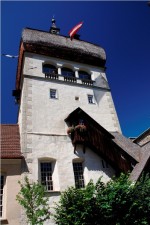 The capital Bregenz lies on the eastern shore of Lake Constance, which it shares with Germany and Switzerland. Lake Constance is 74 km long. The region is known for its mild climate. Bregenz is internationally renown for the Bregenz Festival, held annually.

The hallmark of the festival, is the floating stage on the lake. The town hall was built in 1686 and rebuilt as a granary until the 1810th The landmark of Bregenz is the Tower of St. Martin, in which there is now a museum where you can see beautiful frescoes. Worthwhile excursions are Friedrichshafen, Lindau or the palace gardens at Mainau.